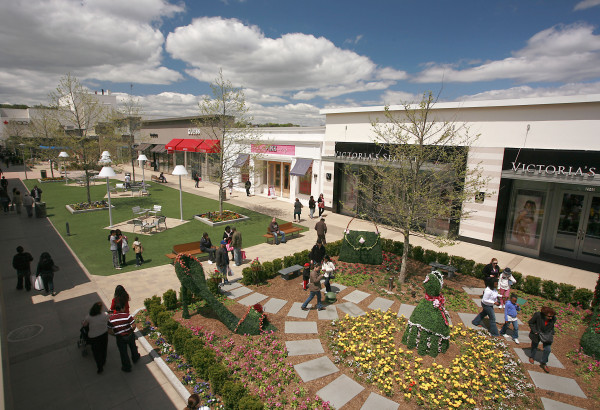 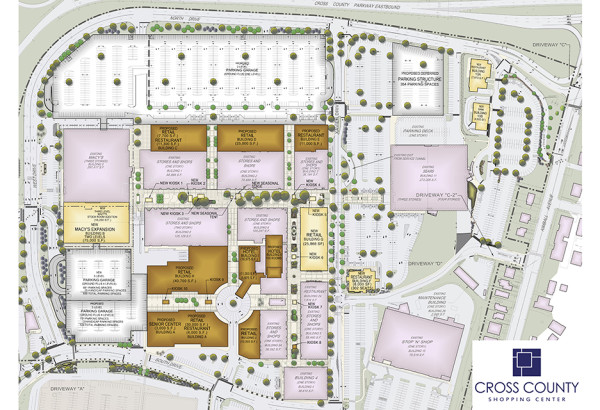 A total of twenty-six intersections were analyzed during the design process, with improvements proposed at twenty-two.

Innovative Retail Concept – Then and Now 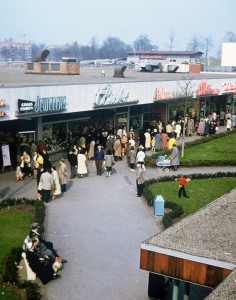 Constructed in the 1950’s, the Cross County Shopping Center was one of the first open air shopping centers to be developed in the country. The original anchor stores were John Wanamaker (now Sears), Gimbels (now Macy’s) and Woolworth’s (now Old Navy). While its original visionary design and prominent location at the junction of the New York State Thruway and Cross County Parkway served the region well for over 50 years, the need for a substantial upgrade and modernization became evident in order to reclaim its prominent status.

The Cross County Shopping Center has undergone a multi-million dollar transformation over the past several years, culminating in a “re-Iaunch” ceremony held in October, 2011. Under the ownership of Brooks Shopping Centers LLC and development / property management by Macerich, JMC was proud to be part of the redevelopment team that designed the expansion and renovation. Faced with numerous challenges including aging infrastructure, tired building facades, ground settlement and inadequate traffic infrastructure, the design team successfully rebranded the center.

Cross County Shopping Center has always had an incredible location – now it has more retail names and a fresh new look to match.

Building upon the successful open air concept, extensive upgrades were designed to maximize customer enjoyment and regain the center’s prominence as a leader in the retail industry. The addition of new luxury retailers and restaurants, exterior upgrades and customer amenities resulted in a refreshed, up-to-date shopping destination.

The renovation is being embraced by the community and has resulted in a customer friendly, engaging shopping environment that reflects contemporary shopping trends.

One of the Country’s First Open-Air Shopping Centers
Entitlements were secured from the City of Yonkers to expand the shopping center by some 250,000 square feet at full build out. To date, a 75,000 square foot Macy’s expansion, 25,000 square foot mixed retail building, TGIF restaurant, Bank of America, Red Lobster restaurant and a 5-level, 700-space parking structure have been added to the center. The remaining square footage is planned to be constructed in future phases.

The transformation of the site began with the complete reconstruction of the building facades to reflect a contemporary theme. The merchandise mix is featured with dramatic storefronts in an outdoor setting. 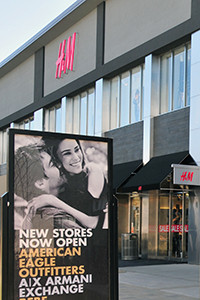 Quality, contrasting and richly colored building materials, with an emphasis on a more human scale and proportion, improve the aesthetics of the center.

A new utilities infrastructure was installed including stormwater management, sanitary sewers, water, gas, electric and telephone, which corrected deficiencies and brought the site into compliance with current standards. State of the art engineering techniques were implemented to mitigate soil settlement issues including pile support, lightweight fill and flexible utility connections.

CCSC Traffic Upgrades
Congested and indirect access to the site deterred discretionary shopping prior to the redevelopment and expansion of the shopping center. Traffic congestion was the norm, especially between Black Friday and Christmas.

As part of the permitting process, JMC designed innovative improvements for the seven site access driveways as well as numerous off-site intersections, including a ‘Texas U-Turn’ and direct access from the Cross County Parkway. The improvements required coordinated approvals by traffic engineers from NYSDOT, the NYS Thruway Authority, Westchester County and the City of Yonkers.

CCSC has benefited from excellent visibility from
I-87 and the Cross County Parkway for more than 50 years.

Traffic signal improvements included a network of wireless communication devices and video cameras which transmit data between the signals and the City’s Engineering Department. The system permits the City’s traffic engineers to monitors traffic conditions and implement demand responsive adjustments to traffic signals in real-time.

To garner public support for the project and proposed traffic improvements, JMC held a number of open meetings with neighboring residents, homeowner associations, civic groups and politicians. The reaction and opinions of the neighborhood went from skeptical to overwhelmingly positive. The long ignored need to improve traffic and safety was finally realized, benefiting both the community and the shopping center.

“One of our shoppers’ primary motivators for visiting the center is the convenience factor. With the traffic improvements in and around the center, the new parking deck and free parking amenity, we’ve received nothing but positive feedback from both our customers and retailers.”
–Charles Ferguson, CSM, MACERICH 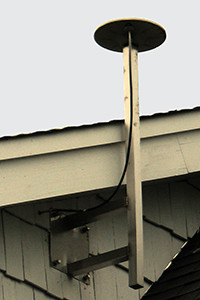 When JMC began to prepare the land surveys of the shopping center, the extent of the changes to be made at the site were unknown. Because of the potential for requiring off-site roadway and highway improvements to relieve traffic congestion, JMC utilized aerial mapping to cover a large area. The topographic survey of the shopping center included the 70 acre site and the surrounding roads including the Cross County Parkway, New York State Thruway and a number of local city streets. The total mapping area was 220 acres.

To save time and money, much of the survey work was completed using a Global Positioning System Real Time Network. JMC maintains a permanent GPS base station at its office with real-time capability.